Top 8 Reasons Why Should You Buy Shiba Inu Coin Today! 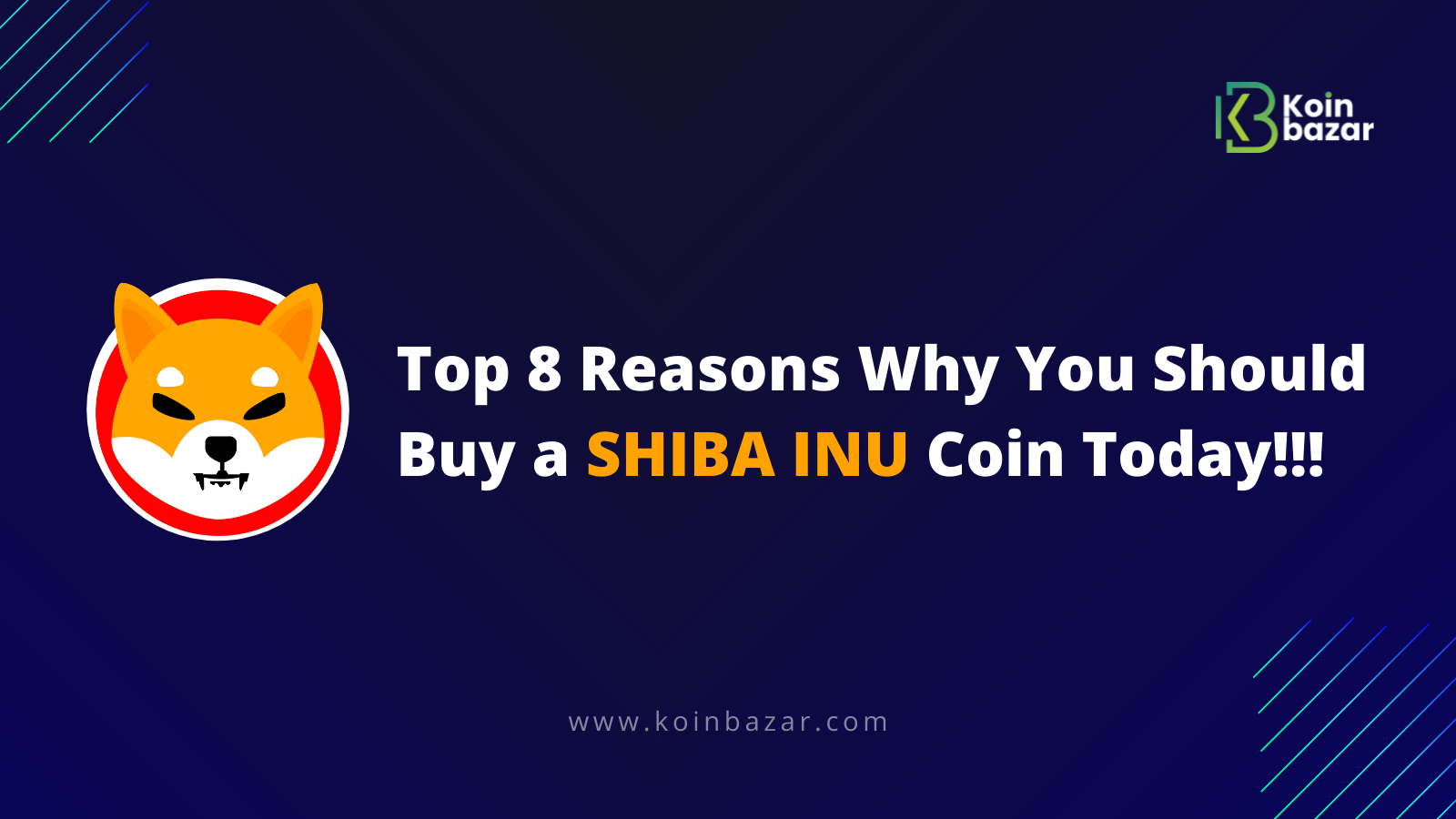 Do you know? Most of the investors have become millionaires after the significant rise of Dogecoin (DOGE). It seems natural, and also everyone is waiting for the next hype cryptocurrency before it thrives. The cryptocurrency market could sometimes look like a puppy farm. It churning out new cryptocurrencies creates a lot of excitement initially among the investors. Let's say, if you have invested $100 DOGE in the previous year, you could have gained an excessive profit on it when Elon Musk has appeared on SNL.

In meanwhile most of the investors are still holding Dogecoin because they are hoping that the market will go up. Some of them started looking at other cryptocurrencies which provide more return on investment (ROI). Nowadays, Why investors are showing interest in Shiba Inu Coin (SHIB)?

What is Shiba Inu coin (SHIB)?

Shiba Inu coin (SHIB) is one of the trending cryptocurrencies which is named after a dog breed from Japan called "Shiba Inu". It was created by an unknown person known as "Ryoshi" in August 2020. Shiba Inu (SHIB) is also referred to as Shiba token, a decentralized cryptocurrency. It is an ERC-20 based token build on the Ethereum blockchain network.

If you are looking to invest in Shiba Inu crypto, but you don't where to buy it.

Then, you have landed at the right place.

Koinbazar, India's leading cryptocurrency exchange where you can buy, sell, and trade your favorite cryptocurrencies securely at the lowest trading fee when compared to the other popular exchanges. We introduced an instant INR deposit and withdrawal option for the Indian users which helps traders directly to transfer their funds from their banks to the Koinbazar's account instantly by using NEFT/RTGS, IMPS in a fraction of minutes without the need of middlemen. Koinbazar has been listed Shiba Inu (SHIB) coin on both Indian Rupee (INR), and Tether (USDT) markets.

Do you want to know the step-by-step procedure to buy a Shiba Inu coin in India from Koinbazar?

Read more: How to buy Shiba Inu Coin in India?

According to CoinMarketCap, Shiba Inu (SHIB) has become the 28th largest cryptocurrency based on market capitalization, and also its market value already reached a high which is more than $3.8 billion less than a year (early June 2021). While I am writing this article, the value of one token is $0.000007762 worth. So that, it attracts many investors to buy this new cryptocurrency when compared to the established crypto such as Bitcoin, Ethereum, etc.

Before investing in Shiba Coin, keep in mind that it has trillions of tokens in circulation. So token with limited supply comes into the game. If you are still confused about whether you should invest in it or not, here are the major reasons to buy Shiba Inu crypto today.

At the time of writing this article, Shiba Inu (SHIB) has an extraordinary market cap $3,083,961,635 of worth it. Despite the fact is that the price of this token is very low. Currently, it is ranked at the 28th position on CoinMarketCap among the various cryptocurrencies in terms of this criteria. As a result, the high market cap shows its high circulating supply which is in its trillions. If you are a short-term investor, you would be interested to know that in the last 24 hours, the trading value of this token is $472,175,170.

Despite the Shiba Inu coin got inspired by Dogecoin, both of them have some variations. Dogecoin has used the same technology, meanwhile Shiba Inu builts over the Ethereum blockchain network. It is generally an ERC-20 token. We considered that Ethereum has more real-world use cases. Because of this, the Shiba coin will grow more even if it's a meme coin and also it has some practical use cases over the Ethereum networks.

Cryptocurrency like Bitcoin, currently the price is about $34,197.01 worth. But now, the SHIB token is just $0.000007762. You can buy a small portion of Bitcoin at $50, you can get a 6.4 million SHIB token with the same cost. So, that it would be better to invest in this token. If the token price continues with its bullish drive, there will be a chance to become an instant millionaire. If it goes worse, still you can get cash and lose of few dollars. But, the scenario is entirely different for Bitcoin and other expensive cryptocurrencies.

Most of the global and multinational crypto exchanges listed Shiba Inu (SHIB) coins. For the investors, it won't be more challenging at the time of selling your coins. We Koinbazar also listed Shiba coins in the INR and USDT markets. When compared to the other exchanges, the trading fee is very low which makes more curious to buy, sell, and trade this token on Koinbazar.

Nowadays, Hype could be an important factor behind a lot of investments in cryptocurrencies. SHIB is one of the most popular cryptocurrencies which has already created hype among investors. A Lot of users have started to look into this. We can't refuse that how Dogecoin was performed in the last years. Based on the meme, the hypes are creating a lot. Eventhough, millions of users are still investing money in it. Many investors say that it's "The Dogecoin Killer" and also I would say it once again.

Buying SHIB tokens over the Ethereum network was more expensive. Because it creates trouble for many investors to buy a small amount of Shiba coin while paying an excessive fee on the Ethereum networks. Nowadays, this situation has been changed better. Top Exchanges like Koinbazar have listed the Shiba Inu coin which makes traders buy it at a low fee instead of spending money on the ethereum platforms.

In the last 24 hours, Shiba Inu's trading volume is about $472,998,031 worth. This value clearly shows that most of the investors are interested to buy and sell this token. You can keep this coin as your favorite one, and also sell it quickly when the time comes.

Like Dogecoin, Shiba Inu has a large community that rallies on the internet. Recently, many of them had a little talk about this coin over the various social media platforms like Twitter, Youtube, and also including Reddit. So far, a huge amount of fan followers are supporting this coin. Till now, it's working well. The revolution on social media just creating a lot of hype on this and also creates an artificial demand among the investors. This is exactly what happened for the Shina Inu coin. If the community grows tremendously all over the world, this token seems to grow continuously. This kind of support creates a worthy investment.

Eventhough the hype for this meme coin, you should keep in mind that trading cryptocurrencies are a high-risk factor. All the cryptocurrencies are volatile and have separate levels of risks. Before investing in any cryptocurrencies, you must have thorough research and knowledge of them. "Patience" plays an important role. Weiss says, "Don't invest to become rich quickly; invest in things you believe will be successful in the long run". So, why invest in Shiba Inu today? The reasons are explained here for you. It will help you to decide where to put your investment.